The parents of Daunte Wright, a 20-year-old Black man who was shot and killed by a white police officer in a Minneapolis suburb on Sunday, said they “can’t accept” the notion that their son’s killing was “a mistake.” 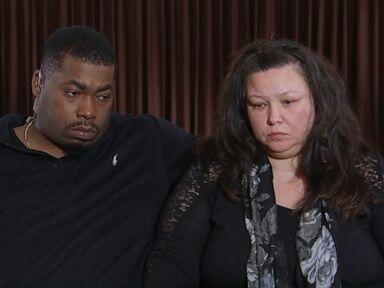 Daunte Wright was driving in Brooklyn Center, about 10 miles northwest of Minneapolis, when he was stopped by police on Sunday afternoon. The officers initially pulled him over for an expired registration tag on his car but determined during the traffic stop that he had an outstanding gross misdemeanor warrant, according to Brooklyn Center Police Chief Tim Gannon.

As police attempted to take him into custody, Daunte Wright reentered the vehicle and one of the officers fired their weapon, striking him. The officer — identified by authorities as Kim Potter, a 26-year veteran of the Brooklyn Center Police Department — intended to deploy her Taser instead of her gun when she “accidentally” shot Daunte Wright, Gannon said. MORE: Officer who fatally shot Daunte Wright during traffic stop meant to use Taser, police chief says

The car sped off, traveling several blocks before crashing into another vehicle. A female passenger in Daunte Wright’s car sustained non-life-threatening injuries during the crash and was transported to a nearby hospital. The passengers in the other vehicle were not injured, according to Gannon.

Officers and medical personnel “attempted life-saving measures” on Daunte Wright but he died at the scene, Gannon said. 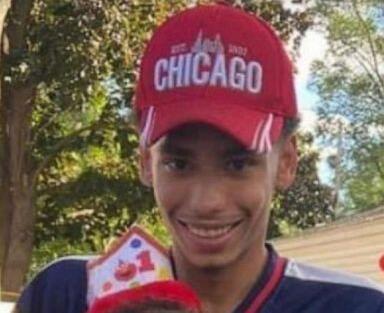 Daunte Wright’s mother, Katie Wright, told ABC News that her son had called her during the traffic stop. She said he told her that police had pulled him over due to air fresheners hanging in his rear view mirror. She told him to take them down and to let her speak with police over the phone if they ask for his car insurance so she could give them the information. That’s when she heard police ask her son to step out of the vehicle. MORE: George Floyd’s brother testifies in ‘spark of life’ phase of Derek Chauvin murder trial

“Daunte said, ‘For what, am I in trouble?’ I heard the phone getting put down pretty hard,” Katie Wright said on “GMA” during Tuesday’s exclusive interview. “And then I heard scuffling and the girl that was with him screaming, and I heard an officer ask for them to hang up the phone and then I didn’t hear anything else.”

“I tried to call back three, four times and the girl that was with him answered the phone and she said that they shot him and he was lying in the driver’s seat unresponsive,” the mother recalled, with tears streaming down her face. “And then I heard an officer ask her to hang up the phone again and then after that, that’s the last time I’ve seen my son. I haven’t seen him since.” 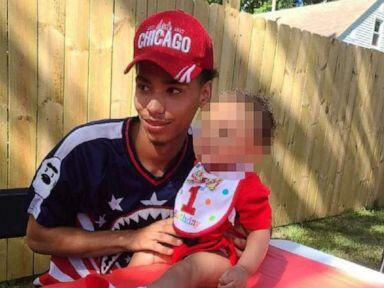 She said she’s unsure why the situation escalated.

“I know my son was scared. He’s afraid of the police, and I just seen and heard the fear in his voice,” she added. “But I don’t know why and it should have never escalated the way it did.” MORE: Jacob Blake speaks out for 1st time since being shot by police

The mother described her son as “an amazing, loving kid” who “had a big heart,” “bright” smile and “loved basketball.”

“He had a 2-year-old son that’s not going to be able to play basketball with him. He had sisters and brothers that he loved so much,” Katie Wright said. “He just had his whole life taken away from him. We had our hearts pulled out of our chests. He was my baby.” 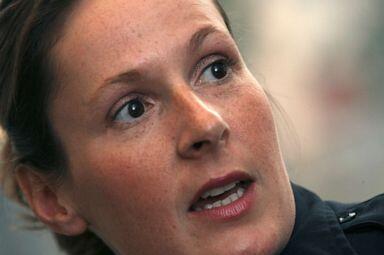 The parents said they want to see “justice served” and the officer who shot their son “held accountable for everything that she’s taken from us.” Brooklyn Center Mayor Mike Elliott has said he “fully support[s] releasing the officer of her duties .”

“My position is that we cannot afford to make mistakes that lead to the loss of life of other people in our profession,” Elliott told reporters Monday.

A preliminary report released Monday by the Hennepin County Medical Examiner said Daunte Wright died from a gunshot wound to the chest and that his death was a homicide. MORE: Key takeaways from Derek Chauvin’s murder trial, Day 12

Earlier Monday at a press conference, the Brooklyn Center Police Department released body camera footage of the fatal encounter. The police chief said Potter can be heard in the video warning Daunte Wright and her fellow officers that she will be deploying her Taser.

“However, the officer drew their handgun instead of their Taser,” Gannon told reporters. “It is my belief that the officer had the intention to deploy their Taser, but instead shot Mr. Wright with a single bullet. This appears to me, from what I viewed and the officer’s reaction and distress immediately after, that this was an accidental discharge that resulted in the tragic death of Mr. Wright.”

Potter can be heard in the video yelling, “Holy s—, I just shot him!” 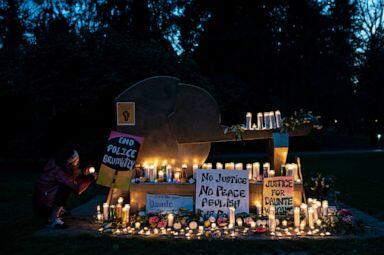 Nathan Howard/Getty Images – PHOTO: A person lights candles at a vigil for Daunte Wright in Portland, Oregon, on April 12, 2021.

The Minnesota Department of Public Safety’s Bureau of Criminal Apprehension is investigating the shooting.

A source with knowledge of the investigation told ABC News that Potter was field training another officer at the time of the deadly shooting.

Civil rights attorney Benjamin Crump — who has represented the families of Trayvon Martin, Breonna Taylor, George Floyd and more — is one of the lawyers representing the Wright family and said that fatal encounters between police and people of color will only stop “when we start treating each other all the same.” MORE: Why George Floyd’s death reverberated in Africa

“She was a training officer and so it’s not about training, it’s about implicit bias,” Crump said on “GMA” during Tuesday’s exclusive interview. “It’s about giving the same respect and consideration to people of color that we give to white American citizens. We don’t see these sort of things happening to white young people that we see happening over and over and over again to young, marginalized minorities.” 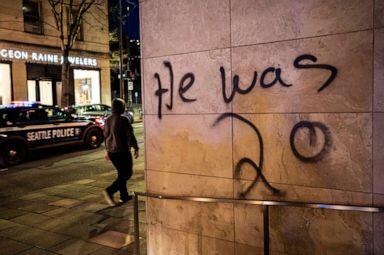 David Ryder/Getty Images – PHOTO: Graffiti sprayed on a building at a protest over the death of Daunte Wright on April 12, 2021, in Seattle.

Daunte Wright’s killing has sparked demonstrations — some violent — in Brooklyn Center, Minneapolis, Portland, New York and other cities. A curfew was imposed in Brooklyn Center, Minneapolis and other parts of Minnesota on Monday evening, and dozens of people were arrested amid riots overnight, according to Col. Matt Langer of the Minnesota State Patrol.

Minnesota has mobilized its National Guard to Brooklyn Center at the request of local authorities. National Guard troops were already deployed in Minneapolis for the ongoing murder trial of Derek Chauvin, the former Minneapolis police officer charged in the May 2020 death of Floyd, which ignited protests nationwide and abroad. MORE: Maryland state trooper fatally shoots 16-year-old after responding to reports of an armed man

“I want to say thank you so much for the support and standing by us,” Katie Wright said, “and making sure that my son’s name doesn’t get swept under the rug.” 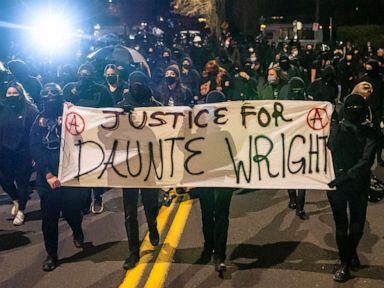 Nathan Howard/Getty Images – PHOTO: Activists march towards the Multnomah County Sheriff’s office during a protest against the killing of Daunte Wright on April 12, 2021 in Portland, Ore.

“Peaceful protests, understandable, and the fact is that, you know, we do know that the anger pain and trauma that exists in the Back community, and that environment is real, it’s serious, and it’s consequential,” Biden told reporters. “But it doesn’t — will not justify violence and/or looting. And so, the question is, how we, in an orderly way, make clear that they get down to a full-blown investigation to determine what the facts are, and what is likely to have happened?”

“And to his family and loved ones, you must know that the president and I grieve with you as the nation grieves his loss. And we stand with you,” Harris said. “Our nation needs justice and healing, and law enforcement must be held to the highest standards of accountability. At the same time, we know that folks will keep dying if we don’t fully address racial injustice and inequities in our country, from implicit bias to broken systems.” MORE: Family of 13-year-old boy shot dead by Chicago police wants ‘to correct the hurtful and false mischaracterization’

Former President Barack Obama and former first lady Michelle Obama issued a statement Tuesday, saying they “empathize with the pain that Black mothers, fathers, and children are feeling after yet another senseless tragedy.”

“The fact that this could happen even as the city of Minneapolis is going through the trial of Derek Chauvin and reliving the heart-wrenching murder of George Floyd indicates not just how important it is to conduct a full and transparent investigation, but also just how badly we need to reimagine policing and public safety in this country,” the Obamas said. “And we will continue to work with all fair-minded Americans to confront historical inequities and bring about nationwide changes that are so long overdue.”