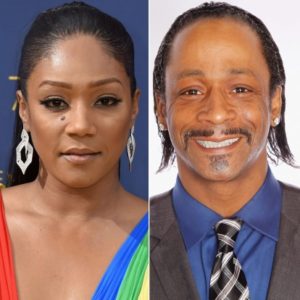 Since the release of the 2017 hit film, Girls Trip, no one has had a better glow up over the past 15 months than Tiffany Haddish.
Of course, with success comes envy. We see it all the time when you’re on top.
Kevin Hart has been the go-to comedian for many years now and as much as he’s beloved by fans, he gets criticism from his comedic peers.
Now his Night School co-star Tiffany Haddish is experiencing that same hate as she got dragged by Katt Williams for no reason.
The veteran comedian claimed Tiffany doesn’t deserve the spotlight she’s been given over comics like Mo’Nique and made some odd quips about her nether-regions during a chat with V-103’s Frank and Wanda In The Morning Show. 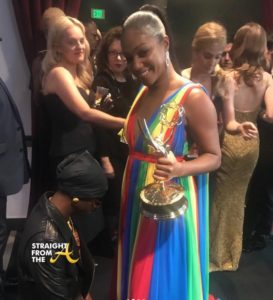 “They [Netflix] base what they pay you by the amount of ticket sales for your last tour. So Mo’Nique’s last tour had 316,000 tickets, therefore that’s what she got offered,” Katt stated, touching upon the fact that the comedienne previously called for a boycott of Netflix over color and gender bias. 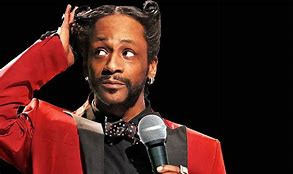 He had more insults to dole out though.
“They’re going to let you do your special, Jerrod Carmichael, but nobody’s gonna watch it. They’re gonna let you be a star, Lil Rel, but you’re ugly and white people don’t believe in ugly stars. They believe that you have to be somebody women want to sleep with and men want to be, but because we’re black they say ‘oh you don’t even deserve that.’ So we get Kevin Hart, Lil Rel, Jerrod Carmichael, Hannibal Burress, just dudes that no woman would talk to in Lennox Mall, but you’re making them superstars because you know ain’t nobody gonna sleep with them.”
Then he honed in some more on Tiffany.
“She’s been doing comedy since she was 16. You can’t tell me your favorite Tiffany Haddish joke. Why? Because she ain’t done a tour yet. She ain’t done a special. She has not proven the ability to tell jokes back to back for an hour to nobody,” Katt declared.
“They like her because she wanna sleep with a white man. That’s why the only thing she said was I wanna give it to Brad Pitt. She said she’s got a diseased vajayjay ain’t nobody checking for that,” he added.
Watch part of his comments about Tiffany, below:

#KattWilliams is known for speaking his mind #Roommates! The comedian paid a visit to V-103, and let’s just say Katt had a lot to say about our girl #TiffanyHaddish, who he says has “not proven her ability to tell jokes” because she’s yet to do a stand-up comedy tour or a special.

Soon after Katt’s comments went viral, Tiffany quickly jumped on social media with a message for the veteran jokester, tweeting, “It’s official I made it! @KattPackAllDay talked about me and didn’t have his facts right! #Iwin #sheready I look forward to see you on Monday Katt, when we pick up our Emmys.”
She finished with “I just want to shower you with REAL Love cause you need it, and I Love you.”
Taking the high-road in her social media response, she kept the same energy when she saw him backstage at the 2018 Emmy Awards (September 17).
Judging by the photos below, it looks like Tiffany successfully fact checked her comedy credits as Katt is bowing at her feet!