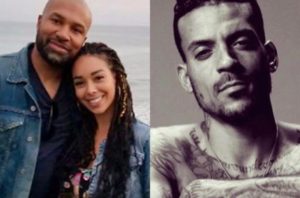 *Former NBA star Derek Fisher has receipts in support of his fiancée, Gloria Govan, in her battle with ex-husband and former NBA star Matt Barnes, in the form of text messages exchanged between the two former athletes.

According to court documents obtained by The Blast, Fisher filed a declaration in Govan’s lawsuit against Barnes, which followed Barnes’ original lawsuit against Govan earlier this year claiming she embezzled $300,000 from him during their marriage.

Govan countersued Barnes for defamation, claiming he falsely accused her of stealing from him and blocking his visitation from their sons.

In his declaration, Fisher claims he and Matt Barnes “have each other’s cell phone numbers” and have exchanged text messages.

Fisher says Barnes texted him on April 7, 2018, “accusing her of crimes and acts of dishonesty and otherwise impugning her and her good name, profession and reputation.”

The text from Barnes states, “Listen.. I’m not sure how much she’s told you.. But she’s mad at me cause I found out she stole nearly a million dollars forged my signature & stole my ss# to get her parent a night club & the house they live in.. Since we’ve been going to court over that situation she’s been holding that hate & frustration for me against my boys.”

Fisher says he is aware that these statements have caused a great deal of distress to Gloria Govan and is filing the doc in support of Govan’s demand that her defamation case not be thrown out.